Well, what do you know? My Video page has seen an explosion of hits lately and is now the most popular page on my blog.

I guess I shouldn't be surprised. Directors like to get set and costume ideas from previous productions. Actors like to see how other students performed their parts.

Well, if you're in either of these camps, you're in luck. I just came across two complete videos of Trouble in Paradise Junction.

One of these takes a few more liberties with the script than I like, even changing the title slightly (for the record, I'm good with minor tweaks, not wholesale changes to the dialogue). But the performances in it are excellent and I think both videos will be helpful to other schools and community theaters seeking inspiration.

And to make the page more useful, I've added info on the length of each video and whether it's the entire play or a particular scene or excerpt.

So enjoy. And keep on posting those videos!
Posted by Todd Wallinger at 9:40 AM 0 comments

Email ThisBlogThis!Share to TwitterShare to FacebookShare to Pinterest
Labels: The Enchanted Bookshop, Trouble in Paradise Junction, Videos, Wicked Is As Wicked Does

Great promo for The Enchanted Bookshop 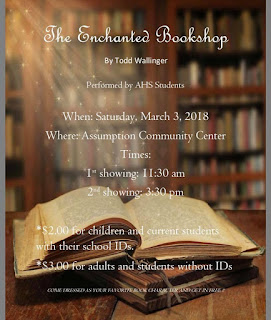 It's kind of hard to read here, but the small print at the bottom of this poster offers a great deal for those attending an upcoming production of The Enchanted Bookshop. Come dressed as your favorite book character and get in free.

What better way to promote a love of reading while getting people excited about your show? I even saw a couple of book lovers on Facebook debating whether to dress as Jane Eyre or Clarisse La Rue.

Babka Without Borders to be published 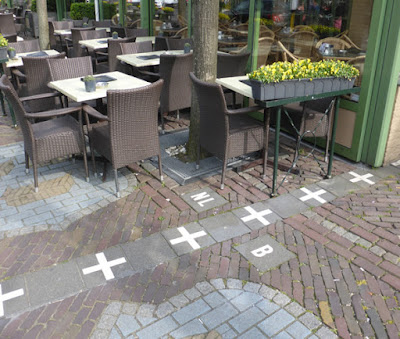 Well, this was a good week. Just days after Babka Without Borders took 2nd place in the Robert J. Pickering contest, Pioneer Drama Service accepted the play for publication.

It's my lucky 13th play with them. And to be honest, I didn't think they'd take it.

As I mentioned before, this play is fairly political and veers dangerously close to satire (which George S. Kaufman famously said is what closes Saturday night).

Also, the play is set in 1910 -- not exactly the most popular time period with high school drama groups and community theaters.

But I'm really glad Pioneer did decide to publish it. It's very funny, even silly at times (a war launched over a babka-baking contest?). It has lots of meaty roles for both males and females. And it has an important message, one that both sides of the political aisle can agree on.

I first came up with the idea for the play during one of my brainstorming sessions. Having just finished writing The Purrfect Crime, I felt it was time for another restaurant play (Million Dollar Meatballs was three years old and had become one of my biggest hits). So I racked my brain to come up with a new twist on this familiar setting.

That's when I remembered a real-life restaurant I once read about. Restaurant Den Engel is just like any other quaint cafe in Europe except for one thing. It lies along the border between two countries: the Netherlands and Belgium.

An image immediately struck me: a restaurant where the border doesn't run along the edge of the restaurant but smack dab through the middle of it.

And I gave it one more twist. Whereas the Netherlands and Belgium have long been at peace, I wanted to explore what would happen if the two countries that share my restaurant went to war.

How would the restaurant's staff serve their customers? Would the babkas that the restaurant is famous for suddenly become contraband? And how would a certain maitre 'd win the heart of the waitress he loves now that they're supposed to be enemies?

You can find the answers to all these questions when the play is released this August. Until then, you'll have to satisfy yourself with this short scene (though you can find more on my Free Scenes and Free Monologues pages). In it, the lovelorn maitre d' mentioned above woos that most serious-minded of waitresses.

LUISA: Peter, please. You're in my way.

PETER: Forgive me, Luisa. I only want to ask you a question.

LUISA: Can't you see I'm busy? If Hildegard catches us chatting again, she'll have our heads!

PETER: Too late. I've already lost my head. Over you.

PETER: Then say yes, and you can be on your way.

LUISA: But I don't even know what the question is.

PETER: I will gladly tell you the question as soon as you tell me yes.

LUISA: I tell you no.

(LUISA tries to go around him, but PETER blocks her way again.)

PETER: All right. Fine. I'll tell you the question. Luisa Brandt, will you go to dinner with me tonight?

LUISA: Dinner? That's your idea of a date?

PETER: What's wrong with dinner? You eat, don't you?

LUISA: Look, every morning I make my family a hearty breakfast. Sausages. Eggs. Maybe some ham. There are so many mouths to feed, I barely have time to feed my own. Then, as soon as I finish there, it's time to rush over here. Babka. Kolaches. Knish. All day long I rush around serving food.  Just once I'd like to do something that doesn't involve food!

PETER: Ah, but this is different. This time you'll be the one who is served.

LUISA: You're wasting your time, Peter Bergmann. There's nothing between us and there never will be.

PETER: Give me one good reason why and I'll leave you alone.

LUISA: You want a reason? I'll give you a reason. We're from two different worlds. I'm from the Grand Duchy of Bunkelburg and you're from the Royal Principality of Primwick.

PETER: Oh, but that's such a little thing. Are our countries so different?

OSKAR: He didn't ask you.

GRETA: Well, someone has to tell him the truth.

PETER: Frau Ziegler, how can you say our countries are different when we share so much in common? A common border. A common language. We even have a common love of babka.

GRETA: If you call what those people make babka.

OSKAR: Have you ever tried Bunkelburg babka?

GRETA: I don't have to. It's from Bunkelburg. That's all I need to know.

LUISA: (To PETER.) Do you see? There can be no peace between our two countries. Not as long as a border separates us.

PETER: But Luisa, in love there are no borders.

LUISA: What do you mean there are no borders? What do you call this line in front of you?

PETER: This? Why, this is nothing but a bit of paint on the floor. See, I will show you.

(PETER boldly steps across the line.)

KARL: I know, but you need to show your passport or you're going to get me in trouble.

LUISA: Peter, please. You don't want to get Karl in trouble.

PETER: No. I wouldn't want to get Karl in trouble.
Posted by Todd Wallinger at 11:43 PM 0 comments 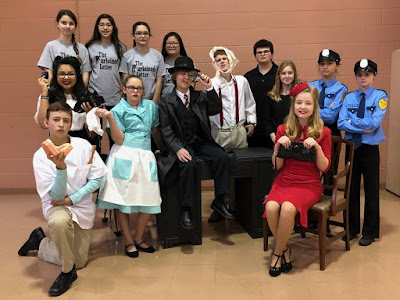 Congratulations to these talented students from St. James Catholic School of Seguin, TX. Last week, their production of The _urloined Letter placed 3rd at the district level of Texas's University Interscholastic League One-Act Play Contest, making them alternates to State.

But that's not all. Tex Hermes, who played gumshoe Nick Bullitt (in fedora, above) was selected to the All-Star Cast, while Maddy Dugi, who played femme fatale Trouble Maecker (in red), was named to the Honorable Mention All-Star Cast.

Great job, everybody!
Posted by Todd Wallinger at 11:50 PM 0 comments