The butler is born

My first full-length play The Butler Did It! has just been published by Pioneer Drama Service. This is a comedy/mystery about a butler who's falsely accused of murder and must find the real culprit before the police arrive.

The problem? He has to do it while tied to a chair.

The play got a fabulous reaction at its first staged reading in Colorado Springs last September, and at the Cheyenne Little Theatre Players reading in Cheyenne Wyoming in November. It's perfect for high schools and community theater looking for a fast-paced, laugh-a-minute comedy.

And I bet you won't figure out who really did it.

To order your copy, visit the Pioneer web page.
Posted by Todd Wallinger at 11:57 AM 0 comments

Critic gets a readthrough

I love readthroughs. It's the first time my characters escape the padded confines of my skull, and it's always a blast to find out what they sound like.

We had the first readthrough of Kill the Critic! last night, and it was everything I had hoped for. The cast was enthusiastic, the characters are already showing some definition and the dialogue moved along at a farceworthy clip, keeping everyone in a near-constant state of laughter.

It's been two months since the disappointing end of my Indiegogo campaign (I raised only $120 toward my $1000 goal) and it feels great to get back to work.

Not to say that we haven't had some excitement. Over the last few weeks, we lost two of our cast and had to scramble to find replacements.

The biggest loss was the critic. The guy we originally cast in the title role is a professional stunt man--not an absolute necessity for the part, but it would have allowed us to push the envelope physicality-wise. It also gave us a nice hook for our marketing efforts.

The hunt for a replacement went on longer than I liked, and things got so desperate that I actually thought about playing the part myself. But I soon came to my senses, and Nancy was able to find an actor with the right combination of arrogance and a willingness to take abuse.

Oh, and did I mention we went through a trio of Officer Schwebnicks?

Well, that's all behind us now. The cast is complete, the script is frozen (for now) and everyone is excited to dive into rehearsal.

There's no time to waste. We've got only 36 days until opening night.
Posted by Todd Wallinger at 4:29 PM 0 comments

Email ThisBlogThis!Share to TwitterShare to FacebookShare to Pinterest
Labels: Kill the Critic!

Get your free sample

Always trying to stay on the cutting edge, Pioneer Drama Service recently started offering free samples of their scripts. It's a great way to give customers a taste of a play while preserving the playwright's right to make a buck.

And believe me, we need it.

To read the sample for my film-noir parody, The _urloined Letter, click here.

If after reading it, you'd like to order your own copy and help send my very talented daughters to college, click here.
Posted by Todd Wallinger at 10:52 PM 0 comments

Email ThisBlogThis!Share to TwitterShare to FacebookShare to Pinterest
Labels: The _urloined Letter 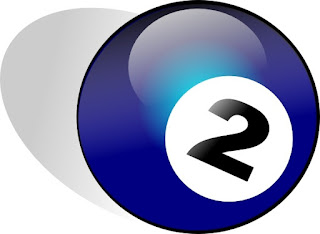 I've always loved May. The end of the school year. The warming weather. The budding trees.

But since my first play was published two years ago, I've got one more reason to love this month: my annual royalty check from Pioneer Drama Service.

This year's check was the first one to include sales from Long Tall Lester, which came out last May. It looks to be a minor hit. In its first year, the western comedy received 15 productions. Not too surprisingly, nearly all of these productions were done west of the Mississippi (or, if you're in Canada, west of Hudson Bay).


Sadly, The _urloined Letter dropped significantly in popularity. Last year, it received just 4 productions compared to 8 in its first year. I hope that's not a sign of things to come. Nick Bullitt and Trouble Maecker deserve better!

In any case, my plays have now been produced in 20 states and one Canadian province. The best part of all this is seeing photos from the productions themselves. The kids pour everything they've got into the plays, and it shows--in the sets, in the costumes, in the pride beaming from every face.

I can't wait to see what next year brings.
Posted by Todd Wallinger at 2:04 PM 0 comments 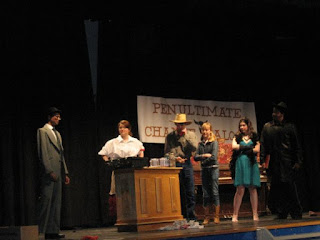 I'm starting to think Saskatchewan is like the Canadian version of Wyoming--lots of cowboys. Anyway, you can read the glowing review of the show here.

And this is a great time to remind all of you writers out there that if you haven't already created a Google Alert for all of your plays and books, you'd better get on it.

Yes, it can be tricky coming up with a search string that delivers exactly what you're looking for and not a boatload of similarly named items (which is why I love to include made-up words in my titles like "_urloined").

And it doesn't catch everything. It completely missed the Broadview production mentioned yesterday. But at least it catches some of my shows without me having to Google myself every day.

Not that I would ever do that. ;)
Posted by Todd Wallinger at 6:15 PM 0 comments 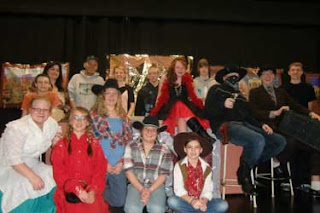 I've gone international. My western comedy Long Tall Lester had its Canadian debut at the Broadview School in Broadview, Saskatchewan.

Actually, it happened a couple months ago, but the Pony Express mount only arrived today.

These talented (and very wise) students took Long Tall Lester to their regional competition and it was named runner-up for Best Visual Production. Congratulations, all!

And if you want to win the big prize next year, I've got a great little play that will do it for you.
Posted by Todd Wallinger at 2:18 PM 0 comments