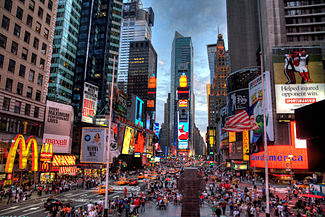 A few months ago, I posted a sob story about my off-off-Broadway debut being cancelled. At the time, I'd contacted the producing company, Thespian Production, to find out why, but they never responded.

I've belonged to a few online playwriting groups and I know this would tick off most playwrights enough that they would give up on the theatre company. In fact, some playwrights would go further, passing the word around so that no more unsuspecting scribes would get duped.

I was tempted to do the same. But then, something told me to give them a second chance. I did, sending them my most successful 10-minute play to date, Fear of Clowns.

It worked. Thespian Production accepted it, and this time everything looks legit because the play is listed on their website and is scheduled to be performed at the Joria Mainstage Theater on West 36th Street in January.

The play they originally chose and then dropped, The Wanderer, isn't left in the cold. That one just got picked up by Oakland's Pan Theatre for their Anything Can Happen in 10 Minutes festival this month.

Not only is this the world premiere of the play, but it's also my West Coast premiere for any play I've written.

Sometimes things work out. Sometimes they don't. But you can give things a little boost if you just keep plugging away.

And you don't hold any grudges.
Posted by Todd Wallinger at 3:03 PM 0 comments