It's New Year's Eve, time again to review my goals for the year and see how well I did.

Overall, the year was a mixed bag. I hit one goal and missed the rest, but the one I hit was a biggie so I'm feeling pretty good.

Here are the goals I posted on New Year's Day:

1) Get some traction on my Enchanted Bookshop screenplay

A year ago, I had left this goal pretty vague, refusing to define exactly what "traction" meant. I was thinking that a contest win or a request to read the script from a producer would count. But if you'd pinned me down, I would have said that my real goal was to get representation.

Well, that's exactly what happened. In May, I signed with Gravity Squared Entertainment in Beverly Hills, the management company that represents Homer Hickam, author of Rocket Boys (which became one of my favorite movies, October Sky).

Over the course of the year, I worked with them on a couple of screenplays, a movie version of The Enchanted Bookshop and a coming-of-age comedy about kids who sneak into an after-hours amusement park called Wonderland.

My manager sent out both scripts to a handful of places but didn't get any interest.  It seems spec scripts are a hard sell right now (when are they not?).

But last month, I finished a TV pilot for The Enchanted Bookshop, and he fell in love with it. We're now putting the final polish on it so it'll be ready to go out after the first of the year.

It's still a longshot, but I'm a lot further along than I was a year ago. Let's call this one a Success.

For a long time, I'd wanted to write a pirate play but I couldn't figure out how to make it work. The problem is that historically, pirates tended to be male, while high school and middle school plays need most of the parts to be female.

That insanely prolific playwright Craig Sodaro came up with one successful approach. But I didn't want to copy him. I had to find a new way to do it.

Well, this year, I finally figured it out. The play would be about five pampered princesses who are forced to pose as pirates--and, in so doing, find the inner strength that didn't know they had.

I'm really happy with how the play turned out. But it was the only play I wrote this year.

Give me Half Credit for this one.

In August, Pioneer published my thirteenth play with them, a political satire titled Babka Without Borders. They did a fantastic job with the editing and artwork. But that was the only play I got published this year.

I didn't submit the pirate play until October so I'm still waiting to hear back from that one. And a couple plays that I submitted to other publishers got rejected.

Chalk this one up as a Fail.

4) Lead a workshop at the Arizona Thespian Festival

This year, I made a new push to get into this Phoenix-based conference, contacting all three of the organizers who were listed on their website. But I didn't get even so much as a no from them.

I don't know why it's so hard to break into this conference--the Colorado one was a piece of cake--but I'm guessing I need a personal recommendation form someone already involved with it.

If an opportunity opens up in the future, I'll jump at it. In the meantime, I'm going to move on from this one.

5) Develop one new play with a school or theatre group

At the end of 2017, a local teacher who had previously produced How I Met Your Mummy expressed an interest in working with me on a play. She wanted something that could be presented as a dinner theatre, and I came up with a play that pretended to be an awards dinner but would turn into a farce when a giant lobster escaped from the kitchen and attacked the wait staff.

While she loved the idea, in the end, we decided to go our separate ways. It would just take too much work for both of us, but we agreed to pursue something in the future. And I'm still looking for other schools to work with.

But in the meantime, we have to call this one a Fail.

One and a half hit out of five? Not a great percentage, if you want to look at it this way. But the one hit I got was a game changer, and I can't wait to see what the New Year brings.
Posted by Todd Wallinger at 11:54 AM 0 comments

All in the family 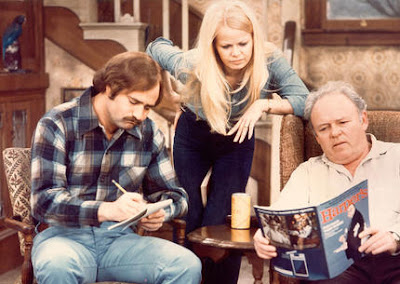 I never wanted to be one of those dads who expected his kids to follow in his footsteps.

My wife and I were blessed with two beautiful girls, and part of the joy of raising them was finding out who they were, what they liked, what they would choose to do with their lives. I would never insist they become writers.

Of course, that doesn't mean I wouldn't encourage them to become writers. After all, I'd wanted to be a writer since I was eight years old and all those years when I was struggling to break in, I kept thinking that if I couldn't do it, then maybe they could.

There was just one obstacle to my plan.

And that's how dreams die.

So what did they become? Ashley, the older one, got a job as a news producer at a TV station, where she was paid to crank out news scripts under the tightest deadlines imaginable.

Brooke, on the other hand, was just hired as a publicist for a PR firm, where she's learning to craft economical yet elegant prose extolling the virtues of their clients.

In others words, writers.

So how do they unwind after a long day of writing? More writing. Blogs, to be exact.

Which is why I'm writing this post in the first place. Both girls have recently launched new blogs and I'm hoping that some of you find them worth following.

Brooke's blog is Roses and Rouge. It's a beauty and fashion blog and, in her lighthearted, inimitable way, Brooke offers a ton of tips and product reviews that'll help you look your best.

Ashley's blog is The Quarterlife Crisis. While she also writes on beauty topics, her posts reflect her growing interest in vegan and health issues. She also discusses the professional and emotional challenges she has had to face after being laid off twice in one year.

Check them out. I think you'll like them.
Posted by Todd Wallinger at 11:25 PM 0 comments