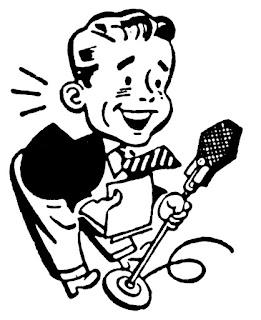 Back in 2012, I wrote a blog titled "I want to be a producer". It was my way of announcing that I'd decided to produce the world premiere of my play Kill the Critic! At the time, I questioned my sanity due to the sheer amount of work required to produce a full-length play. And the simple fact that I had never produced one before.

Well, if I was borderline crazy at the time, I must be completely certifiable now because I've just signed up to not only produce but direct my new play, The Last Radio Show.

Why am I doing it? Well, I guess it's because I haven't produced a play since that time and I really want to get back into it. Not only was producing a blast, but sitting in on rehearsals and hearing the audience response taught me more about playwriting than anything I've ever done.

And if producing taught me that much, then directing should teach me a whole lot more.

Plus, I really, really want to do this one. It's a classic farce, my favorite type of play, and yet it should be easy to produce. There's no set. Light and sound cues are minimal. And much of the play will be read from scripts.

Of course, that's not to say that the play doesn't pose its own challenges. There will be plenty of sound effects, after all. It's just that they'll be generated onstage, just like they were in the Golden Age of Radio. There's also a ton of physical comedy, and making sure that part works is always the toughest part of developing a new play.

The process is already well underway. I've booked the theater. I've reserved a rehearsal space. I've set up the ticketing site. A couple of friends have even signed as stage manager and light/sound tech. Now I need to get the actors.

What's the play about, you say? Well, here's the blurb:


It's 1946, and KUKU Radio is in trouble. Their broadcast tower keeps falling over. The electric company is about to cut off their power. And now the station owner is threatening to fire the whole crew. Can this ragtag group of radio actors out together one perfect show? Or will they be shut down for good?

The show runs Jan 14-16 at Black Box Theatre, 1367 Pecan St., Colorado Springs. Tickets are just $15, To get yours (you know this won't be the last you hear about it!), go to thelastradioshow.brownpapertickets.com.
Posted by Todd Wallinger at 3:53 PM 0 comments 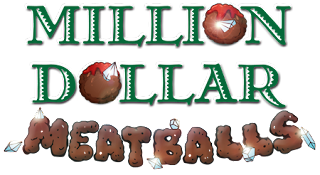 My fifth play has just been published by Pioneer Drama Service. Million Dollar Meatballs is a full-length farce that I first developed at a local high school last year. It has 12 roles (4M/4F/4 either) and runs about 70 minutes.

Get ready for a comedy of epicurean proportions! Two bumbling jewel thieves are on the run from the cops when they duck into Chez Monyeu, a restaurant so bad the mice are their only repeat customers. And that's just the start of their problems. Not only has Chez Monyeu's chef just quit, but the city's most powerful restaurant critic is about to arrive. In desperation, the restaurant's owner, mistaking the thieves for famous French chefs, insist that they make their renowned Million Dollar Meatballs for the tough-minded critic. Insanity ensues as the pair try to keep up the ruse while hunting for the seven priceless diamonds they lost. Will the thieves get away with their crime? Where could the diamonds have gone? And why are the meatballs so crunchy? Find out in this deliciously funny farce!

I love all my plays equally, but this one holds a special place in my heart as it's my first classic farce. I just adore comedies that feature mistaken identity, outrageous accents and some poor sap getting water dumped in his lap. This play has all that and more.