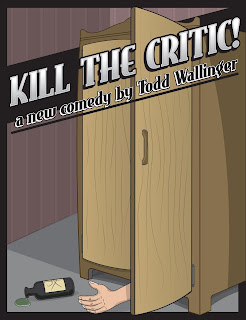 After two years and over a hundred submissions to contests and theatre companies, both large and small, Kill the Critic! is finally getting its second production. Stage Presence Players in Austin, TX has just announced that they'll be performing the play in September.

I couldn't be more excited. My published plays have been getting a ton of productions, and I'm thrilled for every one of them. But this production is especially meaningful to me because this is probably my favorite play I've written. And its the first full-length production I've arranged myself.

Why did I take this route instead of submitting it directly to my publisher? Well, Kill the Critic! is my first "mature" play, a bawdy farce in the spirit of Noises Off or Boeing Boeing. I produced it that way for its world premiere, and audiences responded enthusiastically. I thought that professional theatres would gobble it up.

Well, they didn't. I got a few nibbles, with theatres in both NYC and LA asking to read the whole script. But no bites.

I thought the play was dead.

And then a funny thing happened. I heard from two different groups who had performed The Butler Did It!, wondering whether I had anything similar. I sent them Kill the Critic!, warning them that it was considerably more risque than my murder mystery.

They both loved it. And a great new theatre company in Austin, Texas, the Stage Presence Players, decided to produce it. (The other group, a church in Canada, would have done it but worried that some members of their congregation might complain.)

That's when I realized something. I'd been targeting the wrong markets. Despite the "maturity" of Kill the Critic!, no professional theatre company is ever going to produce it. They simply don't do farces, at least not new ones. No, they'd rather do yet another grim social drama. (Seriously, have you seen the schedules of most professional theatres?)

But community theatres love farces. And if I clean this one up a bit, I may be able to get high schools and churches interested.

So that's what I'm working on now. It's not easy, turning a naughty comedy into something that your grandma will enjoy. But, as I'm discovering, it can be a lot of fun.

If you're in the Austin area, I urge to see Stage Presence Players' production of Kill the Critic! It runs September 24-26.