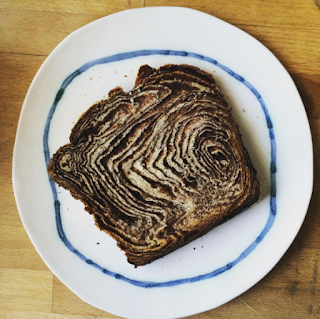 It was just announced that my full-length comedy Babka Without Borders took second place in the 2018 Robert J. Pickering Award for Playwriting Excellence.

It's the second time I took second. In 2013, my full-length farce Kill the Critic! garnered the same award.

The award includes a $50 prize, so I'm very happy about that. Of course, it would have been even better if the play had taken first place as that would have come with a full production, but I can understand why it might not have won. The play requires a large cast (9M/12F) and a small-town community theater may have a hard time recruiting that many actors. That's why I targeted the play to high schools, which usually have a lot of talented students wanting to perform.

Still, it's nice to get this vote of confidence, especially since the play took me so far out of my comfort zone. Set in a cafe that straddles the border between two warring nations, Babka Without Borders is my most political play and includes a healthy dose of satire. And yet it keeps one foot solidly in the world of farce.

It's a quirky play, no doubt. But I like it.

And now it seems at least a few contest judges in Michigan do too.
Posted by Todd Wallinger at 12:01 AM 0 comments

Email ThisBlogThis!Share to TwitterShare to FacebookShare to Pinterest
Labels: Babka Without Borders


Texas's Fort Worth Academy has just posted a video from their recent production of The Enchanted Bookshop. It's only one scene, but it's one of my favorites--the scene where we first meet the bumbling smugglers Eddie and Fingers as well as the eternally tongue-twisted Officer Ketchum.

And this production includes one other twist. Margie, the lonely book lover who owns the shop, has been turned into a guy.

I think it works well--and shows just how flexible this play can be. Many of the famous book characters can easily be played by either gender--Robin Hood, for one, or the devious Fagin. Not to mention the non-literary characters like the smugglers.

Some schools have even gone so far as to add other book characters to the cast.

If it works, I say go for it. But if you're a drama teacher and you want to make the most of what this play has to offer, don't stop there. Can you team up with other teachers at your school to promote the joy of reading?

Maybe the English teachers can have students read from some of the books mentioned in the play. Maybe the school librarian could launch a reading contest with prizes to be awarded at the intermission of your performance. Maybe the art teacher could have students design their own book covers--whether for real-live books or for books that only exist in their imaginations. Maybe the entire school could have a costume day, when students are encouraged to dress up as their favorite book characters.

When it comes to sharing a love of reading, the possibilities are endless.
Posted by Todd Wallinger at 10:19 PM 0 comments

Email ThisBlogThis!Share to TwitterShare to FacebookShare to Pinterest
Labels: The Enchanted Bookshop, Videos

The Purrfect Crime is now available 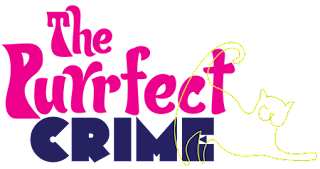 One thing about getting published. It never gets old.

My twelfth play, The Purrfect Crime, was released by Pioneer Drama Service today and I'm just excited about it as if it were my first play.

There's the first look at the artwork (love the cat, guys!). The updating of this website. The scripts. The T-shirt. And of course, the long, nerve-wracking wait to see how popular the play is.

But this one means even more to me than most because it was the last play I developed in Colorado Springs before moving to Phoenix last February.

I lived in Colorado Springs for 23 years. I started a children's theatre company there. Launched my writing career there. Wrote 3 novels, dozens of theater reviews and 22 plays, 7 of which received their first staged reading or world premiere there.

Most importantly, I made a lot of great friends there.

I love Phoenix. I love the palm trees. I love the hiking. I love the funky little restaurants that can be found in every strip mall (and there are a LOT of strip malls). And yes, I love the climate (even in summer!). This is where I plan to live the rest of my life.

But a little piece of my me will always remain in that lovely little city at the foot of Pikes Peak.

Since The Purrfect Crime was one of those plays that premiered in Colorado Springs, I've already written at length about its development. If you're interested in reading those posts, click here for the complete thread. If you're thinking about producing the play and would like to read an excerpt or review the ordering information, click here.

In the meantime, let me leave you with the play's blurb:


Here's a pun-filled tale of feline fortune that all ages will love! Poor "Big Bob" Little. When this cantankerous old rancher dies. nobody mourrns -- not his eldest child, Cecilia, a hard-driving, money-hungry businesswoman; not middle child, Annie, a holistic, dizzy lass hoping to turn the ranch into a bovine meditation retreat; and not even youngest child, Little Bob, a lovable loser obsessed with the percussive arts. That's why it's no surprise when Bob leaves his entire $36 million fortune to his cat, Wiggles. Just what is a kitty to do with that much money? Enter a pair of purr-suasive cons who claim to be the world's foremost pet psychics. Not to let the cat out of the bag, but it's really an elaborate ruse to steal the kitty's diamond-studded toys. But when the corrked cat burglars learn that Wiggles needs a will of her own, they hatch a plan of have it all -- The Purrfect Crime! Can the family work together to stop a cat-astrophe? Or will they just end up fighting like cats and dogs? The Purrfect Crime is a claw-some blend of hiss-terical humor and cat-scratching action. Let the fur fly! 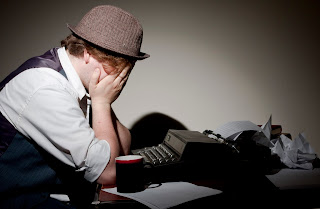 Happy New Year! Have you made any resolutions this year, maybe one to finally write that long-simmering stage play or novel? Well, you might find some inspiration in this article from the UK newspaper The Guardian.

In it, Travis Elborough and Helen Gordon share some of the hundreds of writing quotes they've collected in their 2017 book Being a Writer.

My favorite? This little gem from Katherine Mansfield: "Looking back I imagine I was always writing. Twaddle it was too. But better far write twaddle or anything, anything, than nothing at all."

This reminds me of the advice my high school writing teacher Ms. Aanrud always told us: Write something. You can always edit it later. But you can't edit nothing.

I've lived by these words ever since. Even when I can't think of anything to write, I'll scribble the worst dreck I can come up with just to get the juices flowing again.

It works. Sometimes it can take an hour or more of painful, pointless scribbling, but it works.

Email ThisBlogThis!Share to TwitterShare to FacebookShare to Pinterest
Labels: The Writing Life I love New Year's Day. The year is so fresh, so new, so full of hope. Everything seems possible. All that's needed to make it possible is some sensible goalmaking and a lot of hard work.

The hard work is yet to come. But here are my goals for this year, whether sensible or not.

1) Get some traction on my Enchanted Bookshop screenplay

I'd always promised myself that if one of my plays became a hit, I would try to develop it into a film. Well, that finally happened last year. The Enchanted Bookshop burst out of the gate as soon it was released in August and it's been going gangbusters ever since.

It currently has 79 productions either already performed or scheduled, and if these numbers continue, it'll become one of the most produced plays in the country.

I wrote a handful of screenplays around a decade ago, but I never did anything with them. Oh, I paid for professional feedback, but that feedback was never positive enough to give me confidence that they could get produced. So the screenplays just sat on my hard drive--unsubmitted, unread, unproduced.

Well, not any more. This play has already proven itself on the stage and I feel it could be just as successful on the big screen (or more likely, the small screen). All I need to do is finish it, which should take another couple of weeks, and then I'll start submitting it like crazy.

I know it's still a million to one shot, but at this point I'll take anything to show I'm on the right track. A contest win, a request to read the script from a real-live producer. It's all good.

This shouldn't be too hard, but it does require focus. It takes me about six months of writing 1.5 hours per day to finish a full-length play. So if I concentrate solely on writing new plays and don't get sidetracked by other projects (screenplays, revisions of older plays, changing plays midstream, etc.), I should be able to achieve this goal.

I'm already a third of the way toward this goal. My play The Purrfect Crime will be released by Pioneer Drama Service any day now.

That means I only have to get two more plays accepted for publication. I currently have one play in review at Pioneer, three plays at other publishers and the two new ones I hope to write. So as long as my hit rate stays above 33%, I should be able to reach this goal too.

4) Lead a workshop at the Arizona Thespian Conference

When I was still living in Colorado, I led workshops four years in a row at the very large and very successful Colorado Thespian Conference (including a hugely popular one on the Hero's Journey in Star Wars).

I was hoping to teach a similar class in my new home, but so far I haven't gotten any response from the organizers. In the new year, I'll redouble my efforts to put my name into consideration.

5) Develop one new play with a school or theatre group

Most of my plays are unproduced before they get published. But every year or so, I like to work with a school to develop and premiere one of my scripts. The director and students bring fresh ideas to the material, and the audience response gives me important feedback.

I have already been throwing around ideas with a local middle school that produced one of my plays in 2016. If we can agree on a premise and a date, it should be a go.

But I'm always open to working with other groups. If you're involved with a Phoenix-area school or theatre company and would like to participate in such a project, please email me by clicking here.
Posted by Todd Wallinger at 12:48 PM 0 comments