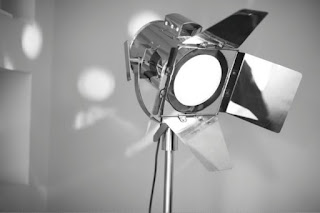 For the first time ever, I'm offering free world premiere rights to one of my plays. That's right. Your school or community theater can be the first in the world to perform my latest comedy. You get to experience the thrill of creating entirely brand new characters. And when the play gets published, it's your cast and crew that'll be listed at the back of the script.

Best of all, it's completely free. You don't need to pay a penny in licensing fees and I will email you  an electronic script that you can print out and copy as many times as you want.

Why am I offering such an incredible deal? Because I want to submit the play to major publishers and I need to get some production credits before I can do that.

The play is Lights! Camera! Murder!, a mystery/comedy set in 1940's Hollywood. It has a cast of nine (4M/5F), requires only a simple unit set and runs about 75 minutes. Here's the blurb:


It's 1948, and Hope Holloway is an ambitious young press agent on Dial M for Migraine, a detective movie that's three weeks late and half a million dollars overbudget. To finish it, temperamental leading man Roger Drummond has to film one last scene, a scene in which his character drinks a poisoned cup of coffee. Roger gives the performance of his life, writhing in agony as he collapses to the floor. But when the scene is done, and Roger remains sprawled on the floor, Hope realizes that the coffee really was poisoned! Worried about the bad press this will generate, Hope quickly hides the body so she can solve the crime herself. But who could the murderer be? Alberto Bologna, the hotheaded director who's only pretending to be Italian? Gwendolyn Chambers, the bubbleheaded starlet who can't read her cue cards without squinting? Tommy Novak, the gawky production assistant who has a crush on Hope? Or one of several other unlikely suspects?

To read a sample, click here. To read the entire script, email me by clicking here. The first theater to schedule a performance date wins the world premiere rights.

If you miss out on the premiere, you can still perform the play for free, but you'll need to make a commitment before July 31 (the performance doesn't need to take place before July 31, you just need to schedule it by then) because that's when this offer expires.

Seriously, how often do you get a deal like this?
Posted by Todd Wallinger at 1:20 PM 0 comments 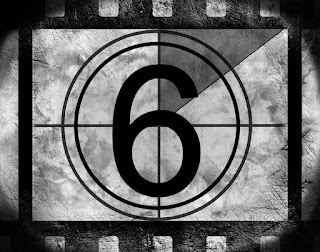 The last twelve months have been a busy year for me, a crazy year, a wildly productive year. As mentioned previously, I was laid off from my day job in April. Although it was completely unexpected and a little bit scary, being out of work turned out to be a gift and I put that time to good use, cranking out seven full-length plays in the ten months I was unemployed.

I'm now starting to reap the rewards. I received my annual royalty check from Pioneer yesterday and the numbers are looking pretty good.

My total number of productions hit a new record with 228, a 52% increase over the 150 I had last year. There was a bit of a boost from the two new plays that were released last year, but most of that increase came from the three plays that were released the previous year and now had a full year of production under their belts. I also saw one older play come roaring back to life.

My #1 play for the year was You're Driving Me Crazy!, with 61 productions. This driver's ed comedy continues to do well at one-act competitions throughout the United States and Canada. I was especially gratified in April when I saw that it got bought by the Manitoba Text Book Bureau. I don't know what this means yet, but the agency provides text books for all of the public schools in Manitoba so I'm hoping the play will start popping up at a lot more schools in our neighbor to the north.

Rumpelstiltskin, Private Eye was #2 with 40 productions. That was a big drop from the 63 productions it got the previous year, its first full year of publication. But that sophomore drop is pretty common for large-cast school plays as a lot of elementary schools and summer camps prefer brand new plays. Still, 40 shows is nothing to sneeze at (though one of the dwarfs might be tempted to).

This was the first full year for Million Dollar Meatballs, which came in at #3 with 34 productions. This play seems to appeal to everyone, with productions being done by elementary schools, middle schools, high schools, colleges and community theatre groups. All it needs now is a nursing home production and it'll have run the gamut!

The Butler Did It! was a close fourth with 33 productions. This one really surprised me because it only got 14 productions the previous year. It appears that this, my first full-length play, has legs.

How I Met Your Mummy was #5 with 30 productions. When it first came out, I thought it would mostly get done around Halloween, but it's actually been popular throughout the year.

Long Tall Lester had 14 productions, a nice pop from the 9 productions it had last year.

The _urloined Letter was #7 with 7 productions, compared to 6 the previous year.

Trouble in Paradise Junction came out in December, but still managed to squeeze in 6 productions before the end of April. I have big hopes for this heartwarming small-town comedy as it has already booked 9 more productions in the coming year.

The Stinky Feet Gang came out in January and had a bit of slow start, with just 3 productions. Part of this may be due to the fact that the catalog lists it as 10M/8F, but it's actually one of my most female-heavy plays as the seven biggest parts are all female and many of the male roles can go either way. One good thing is that it's gotten interest from schools that are looking for gun-free westerns.

I've got two more plays slated to be released this fall, Wicked Is As Wicked Does and The Enchanted Bookshop. I can't wait to see how these large-cast comedies fare.