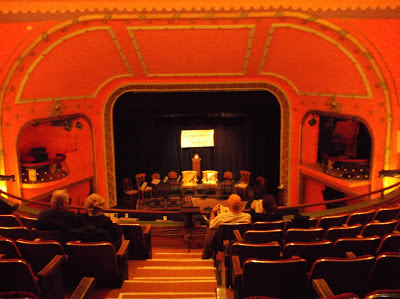 Over the years, I've dabbled in mnay different forms of writing. Short stories. Magazine articles. Newspaper reviews. I've even tried (and been spectacularly unsuccessful with) novels and screenplays.

But now I'm focused on playwriting, and if I had any doubt about the wisdom of thatd decision a week ago, it's gone now. And that's because I just came back from the staged reading of my full-length comedy The Butler Did It! in Cheyenne, Wyoming.

True, playwrights don't make much money. And true, theatre no longer holds the vaunted place in our nation's culture that it used to (when was the last time a playwright appeared on The Tonight Show?).

But playwriting offers a couple of rewards all its own.

A sense of community. And a live audience.

And really, is there anything sweeter than the sound of laughter when you know it's come from your hard-won words?

Cheyenne is just over the border from Colorado, about 160 miles north of my home. Fortunately, my oldest daughter was wise enough to choose a college just 40 miles south of there, so I was able to keep travel costs to a minimum by crashing at her place for the weekend. I'm not sure how she felt about the arrangement, but I'm just cheap enough to say it worked well.

The reading was held at the Atlas Theatre in downtown Cheyenne. Stepping into it was like stepping into a time machine. Built in 1888 as a tearoom, the stately building was later converted into a vaudeville house. The decorative filigree from that time still outlines the proscenium stage and balcony, and the whole place had the air of another, more elegant century.

The back wall of the theater was lined with vintage newspaper ads touting the once famous but now largely forgotten acts that had performed on that stage. My younger daughter just finished a run of Gypsy, and she was eager to know whether young Louise Hovick, later to become Gypsy Rose Lee, was one of them. I couldn't find any mention of her on those yellowed pages, but I did come across a listing for Evelyn Nesbit, the Girl on the Red Velvet Swing, who my daughter knew from another one of her musicals, Ragtime.

One of the actresses later told me that the upper two floors of the building--former hotel rooms now used mostly for storage--are haunted. That doesn't surprise me. A lot of old theaters are rumored to house ghosts, and I could see how this creaky old building would lead to fanciful tales. But this woman swore she felt the presence of the ghost each time she rummaged around in those upstairs rooms, and I for one was not about to doubt her.

The Cheyenne Little Theater Players, one of the oldest community theaters in the country, did an admirable job attracting people to the show. The theater holds about 250, and they managed to draw about 170 people to both of the performances, the most they ever had for a reading.

Considering how much physical comedy and other action I put into my plays, I was unsure how much I would get out of a staged reading or even whether the story would make sense to someone who hadn't immersed themselves in it for months like I had.

But I shouldn't have worried. First-time director Shawn Casey did a marvelous job making the story flow smoothly and effortlessly.

She created a new role--a Chaplinesque character she dubbed the Butler's Butler--and it was this young lady who handled the props. When the addle-brained Gram comes downstairs toting her antique rifle, the Butler's Butler was the one who placed it into her hands. When Jenkins finds himself accused of a crime he didn't commit, it was the Butler's Butler who tied him to a chair. Adding this actor helped communicate the actions in a clear, concise way while leaving the other actors free to concentrate on their scripts.

Another clever touch was provideed when the young cad Trevor was killed. Instead of having him make a quick exit, the stage was darkened, and when the lights came back up, the chair had been tipped backwards onto the floor--with Trevor still in it. The poor actor must have lain there like that for forty minutes until the intermission finally relieved him of his torture. I would have felt sorry for him except for the fact that he got the biggest laugh of the night.

The Friday night audience was great, enthusiastiuc and ready to laugh. The Saturday night crowd was a little more subdued. But the audience is never wrong, and the lack of response in some of the scenes made it clear where I needed to cut.

All in all, it was a wonderful weekend, and I'm grateful to the gang in Cheyenne for making me feel so welcome.

But now it's time to get back to work on my next play.
Posted by Todd Wallinger at 2:21 PM 0 comments