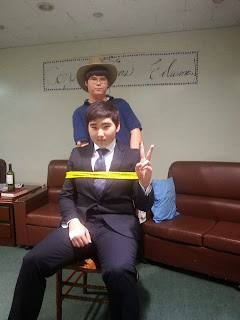 It's always fun to see photos from my plays, especially when the production represents a new country for me. Here's a photo from a production of The Butler Did It! at the International Christian School in Pyeongtaek, South Korea. The production was done very simply, proving once again that you don't need an elaborate set for this fast-paced mystery/comedy. Just a few pieces of furniture and some passionate, fun-loving actors.

When I wrote the scene where the butler gets tied up, I was worried that it might be too difficult, that the cast wouldn't have enough time to do a convincing job with the rope.

You know what? It doesn't matter. Every picture I've seen shows just a few loops of rope around the actor's chest and arms.

Could he get out of the rope if he tried? Sure. But this is theatre, and you can always count on the audience to willingly suspend their disbelief.

Now to finish that scene with a police helicopter...
Posted by Todd Wallinger at 10:00 AM 0 comments

Email ThisBlogThis!Share to TwitterShare to FacebookShare to Pinterest
Labels: The Butler Did It!
Newer Posts Older Posts Home
Subscribe to: Posts (Atom)